As part of my 50th birthday celebrations and a yearly, informal golf competition amongst friends, I visited St Andrews and played a number of courses including the Eden Golf Course adjacent to the Old Course. We also stopped off at Penrith Gold Course and played 18 just before Storm Helene arrived. Helene travelled across the Atlantic and weakened from a tropical storm to an ex- tropical storm but could be felt on the drive back to Preston. 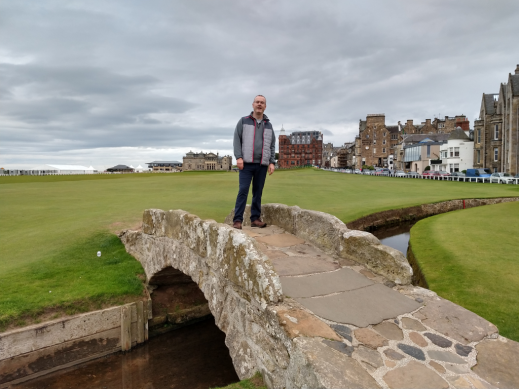 Welcome to my site! After graduating in Computing in 1990, I accepted a position as a programmer at a Runcorn based software house specialising in electronic banking software, namely sp/ARCHITECT-BANK on Tandem Computers (now HPE NonStop). This was before the internet became more prevalent and so the notion of enabling desktop access to company accounts for inter-account transfers and book keeping was still quite a cutting edge idea (and smartphones only ever hinted at in Space 1999). The company was called The Software Partnership (which was taken over by Deluxe Data in 1994). I spent 5 years in Runcorn developing code for SP/ARCHITECT for various banks like TSB, Bank of Scotland, Rabobank and Girofon (Denmark) to name but a few. I then moved onto a software house in Salford Quays for further bank facing projects. After a further 23 years in the IT industry and now a Senior IT Project Manager (both Agile and Waterfall delivery), I thought I would echo out my Career Profile in this corner of the internet for quick and easy access. View all posts by Mark Whitfield