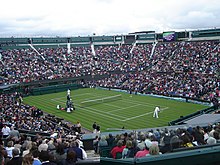 A roofless Centre Court in the early stages of redevelopment.

Reconstruction work on Centre Court was in progress and thus it had no roof. The Wimbledon Championships adopted Hawk-Eye technology for the first time on Centre Court and Court 1. The Cyclops system was still used on other courts.

The Gentlemen’s final was won by Roger Federer for the fifth consecutive time, a feat only before achieved in the Open Era by Björn Borg. It was the third longest men’s singles final of all time at 3 hours and 45 minutes. Venus Williams claimed the Ladies’ title by defeating Frenchwoman Marion Bartoli, a surprise finalist who had defeated world number one at the time Justine Henin. For the first time in twenty years, the Championships saw a home player win a senior title as Jamie Murray won the mixed doubles with Serbian partner Jelena Janković.

Dinara Safina became today’s highest-ranked woman to lose, while Tommy Robredo the highest-ranked man to lose on day 4. However, other seeded players like Ana Ivanovic, Elena Dementieva, Roger Federer and Marat Safin have done their jobs well and advanced towards third round. Also, Serena and Venus Williams returned to their doubles competitions by beating Anne Keothavong and Claire Curran in the first round.

The players who began their games at 11 o’clock were delayed by rain, but it did not affect Justine Henin, Jelena Janković and Patty Schnyder who all hastily completed their matches. Anna Chakvetadze is the highest-ranked woman to lose so far, while Fernando González became the highest-seeded man to lose so far.

The tournament suffered massive rain disruptions, with Amélie Mauresmo and Maria Sharapova being the only singles players to complete (and win) their matches. The afternoon matches were also delayed by rain. Fans on Centre and Court 2 received full refunds; because they saw less than an hour of play, with Mauresmo’s win lasting 57 minutes.

There was a little bit of rain and a few surprises too. Although there was more rain, Justine Henin found time to advance to the quarterfinals, while Elena Dementieva surprised everyone by losing to an unseeded Tamira Paszek. Agnieszka Radwańska, after sending seeded Martina Müller out in the second round a few days earlier, couldn’t do the same thing to Svetlana Kuznetsova. In a highly intense matach, Serena Williams cramped against Daniela Hantuchová late in a second set. Serena battled the injury, losing the second set tie-break but winning after a rain delay.

Most of the women’s 4th round matches were delayed by rain, however, some matches were completed; Svetlana Kuznetsova ended Tamira Paszek‘s dazzling run; 3rd seed and in-form Serb Jelena Janković was defeated by Marion Bartoli; and 2006 champion and 4th seed Amélie Mauresmo fell to Nicole Vaidišová.

Rafael Nadal finally won his match against Robin Söderling, which had lasted since Saturday. Other winners today included Novak Djokovic, who advanced into 4th round and Andy Roddick, who is already in the quarterfinals. Richard Gasquet won his match against Jo-Wilfried Tsonga. Maria Sharapova lost to Venus Williams in straight sets 6-1, 6-3 in one of the biggest upsets of the tournament. Justine Henin and Marion Bartoli became the first female semifinalists. The second round doubles match between Brazilians André Sá and Marcelo Melo against Paul Hanley and Kevin Ullyett set two Wimbledon records, one of most games played in a match (102) and the longest fifth set ever (28-26). This was the second longest match in the history of The Championships, at 5 hours and 58 minutes. The Brazilian duo won.

Venus Williams became another semifinalist after her victory over Svetlana Kuznetsova in straight sets again. Ana Ivanovic joined her when she won the match with Nicole Vaidišová, who could not take advantage of three match points she had in the final set, with Ivanovic eventually triumphing 7-5. Novak Djokovic, Marcos Baghdatis, Tomáš Berdych and Rafael Nadal qualified into quarterfinals today. Nadal battled through another 5-set match, although he completed this one on its scheduled day, without any suspensions due to rain.

Rafael Nadal became the first male semifinalist, and was soon followed by defending champion Roger Federer and by fourth seed Novak Djokovic. Venus Williams is through to the Ladies’ Singles final and Frenchwoman Marion Bartoli joins her making the biggest upset in the tournament – sending number one seeded Justine Henin out. Richard Gasquet, another French player, pulled off the biggest upset of the men’s in taking out #3 seed and ranked Roddick. Roddick had a two set lead before Gasquet won the final 3 sets to book a semi final spot.

The final of the Men’s Singles was determined, Roger Federer vs. Rafael Nadal, a repeat of the 2006 final and French Open final. Federer won in straight sets against Richard Gasquet, whilst Nadal’s opponent, Novak Djokovic, was forced to retire with the match balanced at one set all. Venus Williams won another Wimbledon title against Bartoli in straight sets. (6-4, 6-1)

Roger Federer won his fifth consecutive Wimbledon title after a five-set battle against Rafael Nadal, 3 sets to 2. Federer’s supremacy on grass met a strong challenge from Nadal and the victory did not come easily for the Swiss. But Federer came through by winning the tiebreak in the first and third sets, and faced four break points before victory in the final set. Arnaud Clément and Michaël Llodra, beating number one seeded Bryan brothers, became the Gentlemen’s Doubles champions, while Cara Black and Liezel Huber were victorious in the Ladies’ Doubles final. Jamie Murray became the first British player to win a senior Wimbledon title in 20 years by winning the Mixed Doubles with Serbian partner Jelena Janković, beating Jonas Björkman and Alicia Molik in 3 sets. Urszula Radwańska maintained the family tradition winning the Girls’ Singles title like her sister Agnieszka in 2005 and they became the first sisters to win it. Urszula also became the Girls’ Doubles champion, playing with Anastasia Pavlyuchenkova. The victor of Boys’ Singles was Donald Young and the best boys’ doubles team was Daniel Lopez and Matteo Trevisan.

Broadcasters of the 2007 Wimbledon Championships were as follows: