The software development methodology (also known as SDM) framework didn’t emerge until the 1960s. According to Elliott (2004) the systems development life cycle (SDLC) can be considered to be the oldest formalized methodology framework for building information systems. The main idea of the SDLC has been “to pursue the development of information systems in a very deliberate, structured and methodical way, requiring each stage of the life cycle––from inception of the idea to delivery of the final system––to be carried out rigidly and sequentially” within the context of the framework being applied. The main target of this methodology framework in the 1960s was “to develop large scale functional business systems in an age of large scale business conglomerates. Information systems activities revolved around heavy data processing and number crunching routines”.

Methodologies, processes, and frameworks range from specific proscriptive steps that can be used directly by an organization in day-to-day work, to flexible frameworks that an organization uses to generate a custom set of steps tailored to the needs of a specific project or group. In some cases a “sponsor” or “maintenance” organization distributes an official set of documents that describe the process. Specific examples include:

It is notable that since DSDM in 1994, all of the methodologies on the above list except RUP have been agile methodologies – yet many organisations, especially governments, still use pre-agile processes (often waterfall or similar). Software process and software quality are closely interrelated; some unexpected facets and effects have been observed in practice.

Among these another software development process has been established in open source. The adoption of these best practices known and established processes within the confines of a company is called inner source.

Several software development approaches have been used since the origin of information technology, in two main categories. Typically an approach or a combination of approaches is chosen by management or a development team.

“Traditional” methodologies such as waterfall that have distinct phases are sometimes known as software development life cycle (SDLC) methodologies, though this term could also be used more generally to refer to any methodology. A “life cycle” approach with distinct phases is in contrast to Agile approaches which define a process of iteration, but where design, construction, and deployment of different pieces can occur simultaneously.

Continuous integration is the practice of merging all developer working copies to a shared mainline several times a day. Grady Booch first named and proposed CI in his 1991 method, although he did not advocate integrating several times a day. Extreme programming (XP) adopted the concept of CI and did advocate integrating more than once per day – perhaps as many as tens of times per day.

Software prototyping is about creating prototypes, i.e. incomplete versions of the software program being developed.

A basic understanding of the fundamental business problem is necessary to avoid solving the wrong problems, but this is true for all software methodologies.

Various methods are acceptable for combining linear and iterative systems development methodologies, with the primary objective of each being to reduce inherent project risk by breaking a project into smaller segments and providing more ease-of-change during the development process.

There are three main variants of incremental development:

Rapid application development (RAD) is a software development methodology, which favors iterative development and the rapid construction of prototypes instead of large amounts of up-front planning. The “planning” of software developed using RAD is interleaved with writing the software itself. The lack of extensive pre-planning generally allows software to be written much faster, and makes it easier to change requirements.

The rapid development process starts with the development of preliminary data models and business process models using structured techniques. In the next stage, requirements are verified using prototyping, eventually to refine the data and process models. These stages are repeated iteratively; further development results in “a combined business requirements and technical design statement to be used for constructing new systems”.

The term was first used to describe a software development process introduced by James Martin in 1991. According to Whitten (2003), it is a merger of various structured techniques, especially data-driven information technology engineering, with prototyping techniques to accelerate software systems development.

The basic principles of rapid application development are:

“Agile software development” refers to a group of software development methodologies based on iterative development, where requirements and solutions evolve via collaboration between self-organizing cross-functional teams. The term was coined in the year 2001 when the Agile Manifesto was formulated.

Agile software development uses iterative development as a basis but advocates a lighter and more people-centric viewpoint than traditional approaches. Agile processes fundamentally incorporate iteration and the continuous feedback that it provides to successively refine and deliver a software system.

There are many agile methodologies, including: 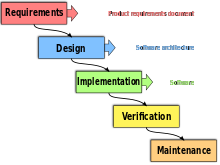 The activities of the software development process represented in the waterfall model. There are several other models to represent this process.

The waterfall model is a sequential development approach, in which development is seen as flowing steadily downwards (like a waterfall) through several phases, typically:

The first formal description of the method is often cited as an article published by Winston W. Royce in 1970 although Royce did not use the term “waterfall” in this article. Royce presented this model as an example of a flawed, non-working model.

The waterfall model is a traditional engineering approach applied to software engineering. A strict waterfall approach discourages revisiting and revising any prior phase once it is complete. This “inflexibility” in a pure waterfall model has been a source of criticism by supporters of other more “flexible” models. It has been widely blamed for several large-scale government projects running over budget, over time and sometimes failing to deliver on requirements due to the Big Design Up Front approach. Except when contractually required, the waterfall model has been largely superseded by more flexible and versatile methodologies developed specifically for software development. See Criticism of Waterfall model. 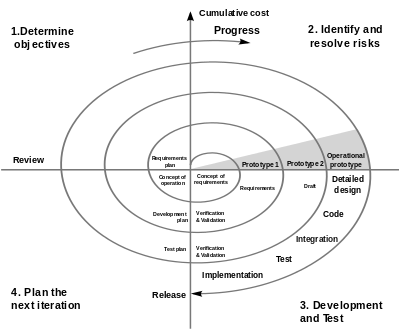 In 1988, Barry Boehm published a formal software system development “spiral model,” which combines some key aspect of the waterfall model and rapid prototyping methodologies, in an effort to combine advantages of top-down and bottom-up concepts. It provided emphasis in a key area many felt had been neglected by other methodologies: deliberate iterative risk analysis, particularly suited to large-scale complex systems.

Other high-level software project methodologies include:

Some “process models” are abstract descriptions for evaluating, comparing, and improving the specific process adopted by an organization. 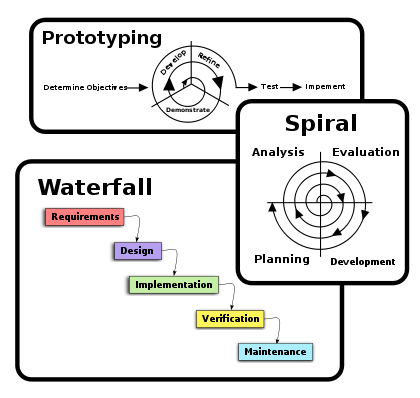 A variety of such frameworks have evolved over the years, each with its own recognized strengths and weaknesses. One software development methodology framework is not necessarily suitable for use by all projects. Each of the available methodology frameworks are best suited to specific kinds of projects, based on various technical, organizational, project and team considerations.

Software development organizations implement process methodologies to ease the process of development. Sometimes, contractors may require methodologies employed, an example is the U.S. defense industry, which requires a rating based on process models to obtain contracts. The international standard for describing the method of selecting, implementing and monitoring the life cycle for software is ISO/IEC 12207.

A decades-long goal has been to find repeatable, predictable processes that improve productivity and quality. Some try to systematize or formalize the seemingly unruly task of designing software. Others apply project management techniques to designing software. Large numbers of software projects do not meet their expectations in terms of functionality, cost, or delivery schedule – see List of failed and overbudget custom software projects for some notable examples.

A particular development team may also agree to programming environment details, such as which integrated development environment is used, and one or more dominant programming paradigms, programming style rules, or choice of specific software libraries or software frameworks. These details are generally not dictated by the choice of model or general methodology.