The University of Bolton (formerly Bolton Institute of Higher Education or simply Bolton Institute) is a public university in Bolton, Greater Manchester, England. It has approximately 6,000 students across all sites and courses, with 700 academic and professional staff. Around 70% of its students come from Bolton and the North West region. It ranked 86 out of 121 institutions in the newly released table.

The University of Bolton traces its origins back to 1825 with the founding of Bolton Mechanics’ Institute. In 1887 the Committee of the Mechanics’ Institute decided that the town’s apprentices required technical instruction for the rapidly expanding engineering advances being made at the turn of the nineteenth century. This resulted in the creation of the new Technical School with student numbers rising to more than 1,500.

In 1926 Bolton Technical School became a college. Fifteen years later a new building was opened offering a wide range of technical education choices, with engineering the most popular. Numbers rose to 5,750 students attending more than 1,000 classes. In 1964 Bolton Technical College and Bolton Institute of Technology were divided into two separate organisations. A J Jenkinson was Principal of the Technical College, Bolton College of Education (Technical) and then the first Principal of Bolton Institute of Technology.

An £8.3 million extension project began in 1991 with the purchase of the former Eagle Factory. Bolton Institute was awarded the right to award taught degrees in 1992, with the powers to award research degrees in 1995. In 1998 Mollie Temple became the third principal and successfully led the institution to achieve university status in 2004.

The university is primarily situated on an urban campus between Deane Road and Derby Street in Bolton. There are two halls of residence, although the university intends to relocate all services on to a single site in the centre of Bolton. There is an academic centre in Ras Al Khaimah, United Arab Emirates.

Following the remodelling and centralisation of the University campus in 2007, a new £2.5 million Social Learning Zone for student study and Students’ Union bar was built. The building also houses the university library, student services and coffee shop. 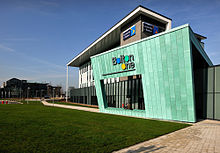 Bolton One building on University campus

The Bolton One facility is a £31 million, three-way partnership with Bolton Council and NHS Bolton situated on the university’s campus. The university contributed around £7 million to the development. The purpose built centre houses new health, science and sports teaching and research facilities – as well as a sports complex.

The University owns and manages one Halls of Residence, Orlando Village.

The University and Bolton Council announced plans for a new £40 million student village, which is set to accommodate up to 850 students in the heart of Bolton town centre, facing the iconic Le Mans Crescent.

UTC Bolton, a university technical college sponsored by the University of Bolton was established at the university campus in September 2015. In November 2015 the UTC was officially opened by Prince Edward, Earl of Wessex and named the ‘Stoller Building’ after Norman Stoller.

The university has also announced plans for a new £10m facility for Science and Engineering which will house its Centre for Advanced Performance Engineering. Construction will begin following the completion of the UTC building in September 2015.

There will also be a renovation and expansion of the current campus through to 2017.

The University and Bolton Council announced plans for a new £40 million student village in February 2015, which is set to accommodate up to 850 students in the heart of Bolton town centre, facing the iconic Le Mans Crescent.

The University has an academic centre in Ras al-Khaimah in the United Arab Emirates and established international links with a number of overseas academic establishments in (Germany), China, Singapore, Malaysia, Malawi and Greece.

On 11 July 2016 the Board of Governors announced the appointment of Lord St. Andrews as Chancellor. The Earl commenced his responsibilities in January 2017.

On 21 February 2015 The Bolton News reported that the Vice-Chancellor George Holmes had been provided with a bridging loan of £960,000 from University funds to assist him in moving home.

As well as offering research opportunities, Masters and PhD degree, it is known for its vocationally focused and industry-relevant taught degree programmes. Its courses include Business and Media programmes. The Times states: ‘The university is not research-driven, but engineering, architecture and the built environment, social work and social policy all contained some ‘world-leading’ research in the 2008 assessments’. The Times made this statement despite the University ranking so low.

In November 2014 it became the first University in the North West to become a Living Wage employer. The University is also above average in closing the gender pay gap.

On 2 April 2016, the University of Bolton became again the sponsors of the Bolton Wanderers, in an agreement which will initially last until Summer 2016.

On 17 February 2016, it was announced that the University of Bolton would become the principal shirt sponsors of the Manchester Giants basketball team for the 2016 season.

The University of Bolton has a diverse student population. Around 13% of home students are from ethnic minority communities, with about 7% of its students being classed as international. This portion of students come from 70 countries outside the UK. The university also has a Chaplaincy that accommodates several different faiths.

The main Students’ Union building is on Deane Road at the centre of the University Campus. As well as being home to the SU bar (The Vista) and the hub of many social events, the union provides numerous other roles, such as student support and advice (The Advice Unit), representation and sporting societies.