The film was written by Robert Buckner and Edmund Joseph, and directed by Michael Curtiz. According to the special edition DVD, significant and uncredited improvements were made to the script by the famous “script doctors”, twin brothers Julius J. Epstein and Philip G. Epstein.

In 1993, Yankee Doodle Dandy was selected for preservation in the United States National Film Registry by the Library of Congress as being “culturally, historically, or aesthetically significant”.

In the early days of World War II, Cohan comes out of retirement to star as President Roosevelt in the Rodgers and Hart musical I’d Rather Be Right. On the first night, he is summoned to meet the President at the White House, who presents him with a Congressional Gold Medal (in fact, this happened several years previously). Cohan is overcome and chats with Roosevelt, recalling his early days on the stage. The film flashes back to his supposed birth on July 4, whilst his father is performing on the vaudeville stage.

Cohan and his sister join the family act as soon as they can learn to dance, and soon The Four Cohans are performing successfully. But George gets too cocky as he grows up and is blacklisted by theatrical producers for being troublesome. He leaves the act and hawks his songs unsuccessfully around to producers. In partnership with another struggling writer, Sam Harris, he finally interests a producer and they are on the road to success. He also marries Mary, a young singer/dancer.

As his star ascends, he persuades his now struggling parents to join his act, eventually vesting some of his valuable theatrical properties in their name.

Cohan retires, but returns to the stage several times, culminating in the role of the U.S. President. As he leaves the White House, after receiving the Congressional Gold Medal from the President, he performs a tap dance down a set of interior stairs (which Cagney thought up before the scene was filmed and performed with no rehearsal). Outside, he joins a military parade, where the soldiers are singing “Over There“, and, at first, he isn’t singing. Not knowing that Cohan is the song’s composer, one of them asks if he knows the words. Cohan’s response is a smile and then joins in the singing. 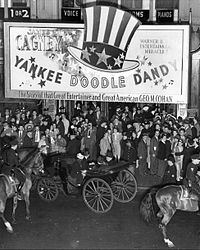 Premiere at New York’s Hollywood Theatre on May 29, 1942. Tickets were available only to those who bought War Bonds. Former New York governor Al Smith and his wife are in the horse-drawn carriage. 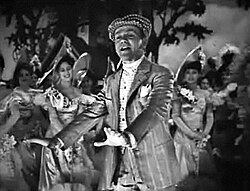 Cagney was a fitting choice for the role of Cohan since, like Cohan, he was an Irish-American who had been a song-and-dance man early in his career. His unique and seemingly odd presentation style, of half-singing and half-reciting the songs, reflected the style that Cohan himself used. His natural dance style and physique were also a good match for Cohan. Newspapers at the time reported that Cagney intended to consciously imitate Cohan’s song-and-dance style, but to play the normal part of the acting in his own style. Although director Curtiz was famous for being a taskmaster, he also gave his actors some latitude. Cagney and other players came up with a number of “bits of business”, as Cagney called them, meaning improvised lines or action in theater parlance.

A number of the biographical particulars of the movie are Hollywood-ized fiction, such as omitting the fact that Cohan divorced and remarried, and combining Cohan’s two wives Ethel and Agnes into a single character named Mary, and taking some liberties with the chronology of Cohan’s life and the order of his parents’ deaths). Nevertheless, care was taken to make the sets, costumes, and dance steps match the original stage presentations. Twice, Cagney sprained an ankle while mastering Cohan’s stiff-legged dance style. This effort was aided significantly by a former associate of Cohan’s, Jack Boyle, who knew the original productions well. Boyle also appeared in the film in some of the dancing groups.

Cagney, as Cohan, is shown performing as a singing and dancing version of President Franklin D. Roosevelt. Although it was well known, the reality of Roosevelt’s use of a wheelchair after polio was not emphasized at the time. In the film, Roosevelt never leaves his chair when meeting Cohan.

The movie poster for this film was the first ever produced by noted poster designer Bill Gold.

Cohan himself served as a consultant during the production of the film. Due to his failing health, his actual involvement in the film was rather limited. However, Cohan did see the film before he died (from cancer) and approved of Cagney’s portrayal. Because of fears over Cohan’s failing health, Warner Brothers moved up the scheduled gala premiere from July 4 to May 29; the original date had been chosen because of the film’s patriotic theme and because Cohan really had been born on the Fourth of July as he wrote in the lyrics of his “Yankee Doodle Dandy.” In the end, Cohan lived for several more months after the film’s release.

Cagney had initially been opposed to a biopic of George M. Cohan’s life, having disliked Cohan since the Actors’ Equity Strike in 1919, in which he sided with the producers. In 1940, Cagney was named, along with 15 other Hollywood figures, in the grand jury testimony of John R. Leech, the self-described ‘chief functionary’ of the Los Angeles Communist Party who had been subpoenaed by the House Un-American Activities Committee (HUAC). The New York Times printed the allegation that Cagney was a communist on its front page. Cagney refuted the accusation and Martin Dies, Jr. made a statement to the press clearing Cagney. William Cagney, one of the film’s producers, is reported to have said to his brother that “we’re going to have to make the goddamndest patriotic picture that’s ever been made. I think it’s the Cohan story”.

The film nearly doubled the earnings of Captains of the Clouds (1942), Cagney’s previous effort, bringing in more than $6 million in rentals to Warner Bros.

This made it the biggest box office success in the company’s history up to that time. The star earned his contractual $150,000 salary and nearly half a million dollars in profit sharing. According to Variety magazine, the film earned $4.8 million in theatrical rentals through its North American release.

Contemporary reviews were highly positive. Bosley Crowther of The New York Times said that film patrons would do well to see it, for “you will find as warm and delightful a musical picture as has hit the screen in years, a corking good entertainment and as affectionate, if not as accurate, a film biography as has ever—yes, ever—been made … there is so much in this picture and so many persons that deserve their meed of praise that every one connected with it can stick a feather in his hat and take our word—it’s dandy!” Variety called the film “as entertaining as any top filmusical ever made … James Cagney does a Cohan of which the original George M. might well be proud.” Harrison’s Reports wrote: “Excellent! Audiences should find this musical comedy, which is based on the life of George M. Cohan, one of the most sparkling and delightful musical pictures that have ever been brought to the screen. Much of its entertainment value is due to the exceptionally fine performance of James Cagney, whose impersonation of Mr. Cohan is uncanny—his gestures, his talk, and his dancing, are done to perfection.” John Mosher of The New Yorker called the film “a complete delight, an extravaganza of tunes the country has liked for decades,” although he considered it “dubious” as a biography of Cohan.

The film won Academy Awards for Best Actor in a Leading Role (James Cagney), Best Music, Scoring of a Musical Picture and Best Sound Recording (Nathan Levinson). It was nominated for Best Actor in a Supporting Role (Walter Huston), Best Director, Best Film Editing for George Amy, Best Picture and Best Writing, Original Story. In 1993, Yankee Doodle Dandy was selected for preservation in the United States National Film Registry by the Library of Congress as being “culturally, historically, or aesthetically significant”.