The film tells the story of a mysterious stranger who arrives at a tiny isolated town in a desert of the southwest United States in search of a man. The film was adapted by Don McGuire and Millard Kaufman from the short story “Bad Time at Honda” by Howard Breslin. The original story had appeared in The American Magazine in January 1947, with full-color illustrations by Robert Fawcett.

In late 1945, one-armed John J. Macreedy (Spencer Tracy) gets off a passenger train at the isolated desert hamlet of Black Rock. It is the first time in four years that the train has stopped there. Macreedy is looking for a man named Komoko, but the few residents are inexplicably hostile. The young hotel desk clerk, Pete Wirth (John Ericson), claims he has no vacant rooms. Macreedy is threatened by Hector David (Lee Marvin). Later, Reno Smith (Robert Ryan) informs Macreedy that Komoko, a Japanese-American, was interned during World War II.

Certain that something is wrong, Macreedy sees the local sheriff, Tim Horn (Dean Jagger), but the alcoholic lawman is clearly afraid of Smith and is impotent to help. The veterinarian and undertaker, Doc Velie (Walter Brennan), advises Macreedy to leave town immediately, but also lets slip that Komoko is dead. Pete’s sister, Liz (Anne Francis), rents Macreedy a Jeep. He drives to nearby Adobe Flat, where he finds a homestead burned to the ground and wildflowers. On the way back, Coley Trimble (Ernest Borgnine) tries to run him off the road.

Macreedy decides to leave town and goes to the garage to again rent the jeep from Liz; but she, having been confronted by Smith earlier, denies him the vehicle and drives away to avoid conversation about the strange goings-on in the town. Macreedy then sits down outside the garage to consider his situation. Smith comes by, ostensibly to fill his car with gas. Smith asks and Macreedy discloses that he lost his left arm fighting in Italy. Macreedy says the wildflowers at the Komoko place lead him to suspect that a body is buried there. Smith reveals that he is virulently anti-Japanese; he tried to enlist in the Marines the day after the attack on Pearl Harbor, but failed the physical.

Macreedy tries to telephone the state police from Doc Velie’s office, but Pete refuses to put the call through. Doc Velie admits that something terrible happened four years ago and that Smith has everyone too terrified to speak up. Velie offers Macreedy his hearse to leave town. Hector rips out the distributor cap and spark plug wires. Macreedy goes to Hastings’ (Russell Collins) telegraph office and writes a telegram addressed to the state police. At the town diner, Trimble picks a fight with Macreedy, but Macreedy uses martial arts to beat him up. Macreedy tells Smith that he knows Smith killed Komoko and that he was too cowardly to do it alone, so he involved Hector, Pete, and Coley; Macreedy also warns that when Smith’s hoods eventually realize they’re being played by Smith one of them will turn against him. 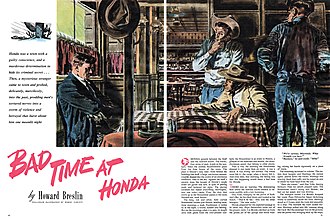 Robert Fawcett illustrated The American Magazineprinting of “Bad Time at Honda”, a 1947 short story by Howard Breslin that was adapted for the film Bad Day at Black Rock

When Macreedy goes to the hotel lobby, Smith and his henchmen are already there, as are Doc Velie and Sheriff Horn. Hastings arrives and tries to give Smith a piece of paper, but Macreedy snatches it away and discovers that it is his own unsent telegram. Macreedy and Doc Velie demand that Sheriff Horn do something. When Horn tries, Smith just takes away his sheriff’s badge and pins it on Hector. Hector tears up the telegram form. After Smith and Hector leave, Macreedy reveals that the loss of his arm had left him wallowing in self-pity, but Smith’s attempt to kill him has reinvigorated him. Macreedy finally reveals why he is there: Komoko’s son died in combat while saving Macreedy’s life. Macreedy intended to give his posthumous medal to Komoko. In turn, Macreedy learns that the elder Komoko had leased some farmland from Smith, who was sure there was no water there. Komoko had dug a well and found water. After Smith was turned down for enlistment after Pearl Harbor, he and the other men spent the day drinking, then decided to scare Komoko. The old man barricaded himself inside his home, but the men set the place on fire. When Komoko emerged ablaze, Smith shot him.

Pete sets in motion a plan, involving Liz and Doc Velie, to help Macreedy escape under cover of darkness. Hector is standing guard outside the hotel; Pete lures him into the hotel office, where Doc Velie knocks him out. Liz drives Macreedy out of town in her Jeep, but stops in a canyon. Macreedy realizes he has been betrayed. When Smith starts shooting at him, Macreedy hides behind the Jeep. Liz rushes to Smith despite Macreedy’s warning. Smith tells her that she has to die along with the rest of his accomplices. He shoots her in the back as she runs away. Macreedy finds a bottle and fills it with gasoline, creating a Molotov cocktail. When Smith climbs down for a better shot, Macreedy lights and throws it, setting Smith on fire.

Macreedy drives into town with the injured Smith and Liz’s body. The state police are called in. As Macreedy is leaving, Doc Velie requests Komoko’s medal to help Black Rock heal. Macreedy gives it to him just before boarding the train.

Nicholas Schenck, president of Loews Incorporated, MGM’s parent company at the time, nearly did not allow the picture to be made because he felt that the story was subversive. The film’s producer, Dore Schary, wanted Spencer Tracy for the leading role. Concerned that Tracy might not accept, Schary ordered the script changed so that Macreedy was a one-armed man. He concluded that no actor would turn down the chance to play a character with a handicap. Screenwriter Millard Kaufman, a World War II Marine platoon leader at age 25 thought Tracy too old for the role of a former platoon leader

As John Wayne had recently made a film called Hondo the producers feared that calling their film Bad Day at Honda would confuse filmgoers into thinking they had already seen it. Kaufman whilst location scouting in Arizona, came upon a post office and gas station collectively known as Black Rock. Kaufman telephoned Dore Schary to ask, “Why don’t we call it Black Rock? And do it in California?”

Just before shooting began, an indecisive Tracy tried to back out of the picture. Schary made clear that he was willing to sue the actor if he quit the film. According to Robert Osborne of the television network Turner Classic Movies, in the introduction to the film’s airing on its weekly segment The Essentials, Tracy, weighed down by his growing alcoholism, refused to give MGM an answer. In order to close the deal, according to Osborne, an MGM executive contacted Tracy shortly before filming was to begin and said, “Don’t worry, Mr. Tracy, a copy of the script has been sent to Alan Ladd and he has agreed to do the picture.” The next day, Tracy committed to Bad Day at Black Rock. Ladd, however, apparently never even saw the script. It turned out to be Tracy’s last film for MGM, with the exception of How the West Was Won (1962), for which Tracy supplied the narration.

Preview audiences reacted negatively to the film’s original opening sequence. A revised one, showing the speeding train rushing at the camera, replaced it. The shot was taken from a helicopter as it flew away from the moving train. The film was run in reverse to create the opening shot.

Bad Day at Black Rock was filmed in Lone Pine, California and the nearby Alabama Hills, one of hundreds of movies that have been filmed in the area since 1920. The “town” of Black Rock was built for the film. Today nothing remains of the set, erected one mile north (36°38′2.84″N 118°2′23.74″WCoordinates:

Variety magazine’s reviewer wrote: “Considerable excitement is whipped up in this suspense drama, and fans who go for tight action will find it entirely satisfactory. Besides telling a yarn of tense suspense, the picture is concerned with a social message on civic complacency.”

Bosley Crowther, film critic for The New York Times, also liked it, writing, “Slowly, through a process of guarded discourse, which director John Sturges has built up by patient, methodical pacing of his almost completely male cast, an eerie light begins to glimmer … Quite as interesting as the drama, which smacks of being contrived, are the types of masculine creatures paraded in this film. Mr. Tracy is sturdy and laconic as a war veteran with a lame arm (which does not hamper him, however, in fighting judo style). Mr. Ryan is angular and vicious as the uneasy king-pin of the town, and Walter Brennan is cryptic and caustic as the local mortician with a streak of spunk. Ernest Borgnine as a potbellied bully (he was Sgt. “Fatso” Judson in From Here to Eternity), Dean Jagger as a rum-guzzling sheriff, Lee Marvin as a dimwitted tough, John Ericson as a nervous hotel clerk and Russell Collins as a station-master are all good, too.”

Despite a storyline she called “crudely melodramatic”, Pauline Kael heaped praise on the film for its direction and cinematography, calling it “a very superior example of motion picture craftsmanship”. Bilge Ebiriconsiders the film to be “one of the greatest films ever made.”

The review aggregator Rotten Tomatoes reported that 96% of critics gave the film a positive review, based on 25 reviews.”

The 1980s television program, The A-Team, had a Season 1 word play title episode called “Black Day at Bad Rock”, with a somewhat similar theme of an isolated California desert town, only this one a present-day town threatened by an oncoming biker gang out to free its leader and avenge his imprisonment by destroying the town.

One of the cartoon episodes in the Tom and Jerry: The Chuck Jones Collection is titled Bad Day at Cat Rock, a pun on the film’s title. The cartoon bears no resemblance to the film’s plot.