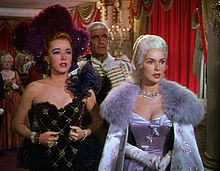 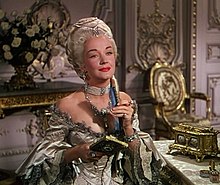 Scaramouche is a 1952 Metro-Goldwyn-Mayer Technicolor romantic adventure film based on the 1921 novel Scaramouche by Rafael Sabatini as well as the 1923 film version starring Ramón Novarro.

The film stars Stewart Granger, Eleanor Parker, Janet Leigh, and Mel Ferrer. It was directed by George Sidney and produced by Carey Wilson from a screenplay by Ronald Millar and George Froeschel. The original music score was composed by Victor Young and the cinematography by Charles Rosher.

In France just prior to the French Revolution, Queen Marie Antoinette (Nina Foch) asks her cousin Noel, the Marquis de Maynes (Mel Ferrer), to uncover the identity of “Marcus Brutus”, a dangerous pamphleteer rousing hatred of the aristocracy.

Meanwhile, André Moreau (Stewart Granger), a nobleman’s bastard, kidnaps his beloved Lenore (Eleanor Parker) to keep her from marrying another man. Afterwards, Moreau learns that his father is the Comte de Gavrillac. While traveling to meet his parent, Moreau runs into Aline de Gavrillac (Janet Leigh), the Queen’s ward, when her carriage breaks down in the road. They are strongly attracted to each other, but Moreau’s ardor suddenly cools when he learns that she is his half-sister. He hides that information from her, partly because of sympathy after he learns the Comte de Gavrillac has recently died.

By chance, de Maynes encounters Marcus Brutus, who turns out to be Moreau’s best friend, Philippe de Valmorin (Richard Anderson). A master swordsman, de Maynes provokes de Valmorin into a duel, then toys with his inexperienced opponent before finally killing him. Enraged, Moreau attacks, but does no better than his dead friend. After de Maynes easily disarms him several times, Moreau chooses discretion over valor and flees for his life, vowing to kill de Maynes the same way he slew de Valmorin.

Chased by de Maynes’s henchmen, led by the Chevalier de Chabrillaine (Henry Wilcoxon), Moreau hides out in the commedia dell’arte troupe in which Lenore performs. Forced to disguise himself as the character Scaramouche, he discovers a hidden talent as a performer. Burning for revenge, Moreau seeks out de Maynes’ fencing instructor, Doutreval (John Dehner), and trains diligently in secret for weeks, while also performing with the troupe. However, de Maynes appears during one such training session, and they fight for a second time. Moreau is still overmatched, and is saved only by Aline’s unexpected arrival, enabling Moreau to escape (with Doutreval’s assistance).

Moreau decides to seek out Doutreval’s teacher, Perigore (Richard Hale), taking the troupe to Paris for that purpose. There, Dr. Dubuque (John Litel), a deputy of the new National Assembly, seeks his help. The aristocrats in the assembly are systematically killing off the deputies representing the common people by provoking them into duels. Moreau is not interested, until Dubuque mentions that de Maynes is one of the duelists; then he eagerly accepts the seat of a deceased deputy. Each day, he shows up at the assembly to challenge de Maynes, only to find his enemy absent on trivial but official duties, arranged by Aline and Lenore working together to protect the man they both love. However, other nobles in the National Assembly are eager to fight the newcomer, challenging him on a daily basis. Moreau wins every time.

In the meantime, de Maynes becomes engaged to Aline. Overhearing de Maynes’ intention to confront Moreau that night, Aline persuades him to take her out instead. At the suggestion of de Chabrillaine, they attend a performance of the De Binet Troupe, where Andre seizes his opportunity for revenge. The two men engage in a prolonged duel (reputedly the longest in screen history at about seven minutes) that ranges throughout the theater and finally back onto the stage itself. At the end, Moreau has de Maynes at his mercy, helpless as Philippe de Valmorin had been, but something he cannot explain stays his hand. Moreau stalks off, leaving de Maynes bloodied but alive.

Later, Moreau learns from Philippe’s father (Lewis Stone) that his father is not the Comte de Gavrillac, but rather the old Marquis de Maynes, the Comte de Gavrillac’s friend; Noel, the man he could not kill, is his half-brother. He then realizes that he is not related to Aline after all, so they can be married. Lenore, after giving him her blessing, consoles herself with a certain Corsican officer.

The studio planned to adapt the novel in late 1938, with production set to commence in early 1939, though pre-production did not start until 1950.

Initially, the film was meant to be a MGM musical starring Gene Kelly, with Ava Gardner as Lenore and Elizabeth Taylor co-starring as Aline. Their commitments to the film were confirmed in early 1951. At one point, other than Kelly, Fernando Lamas and Ricardo Montalban were also considered for the lead.

“I always felt that Scaramouche should have been a musical,” said George Sidney. “It would have needed the most crafty score but it could have been terribly exciting.”

However, when Stewart Granger was contracted by the studio after his success in King Solomon’s Mines, one of his stipulations was that he star in the then-upcoming Scaramouche project.

Ava Gardner was announced as Granger’s co-star. Ricardo Montalban was signed to play the Marquis de Maynes, the villain.

Eventually Montalban was dropped and it was announced Granger would play both the hero and the villain. Elizabeth Taylor was mentioned as a female lead in addition to Gardner.

Granger was then cast in Constable Pedley (later called The Wild North) which required location filming in snow. This meant he left Scaramouche entirely; Montalban returned to the film as the hero, and Fernando Lamas was cast as the villain. Granger went on to shoot part of The Wild North, then production was halted. He made The Light Touch, and then completed The Wild North. MGM then decided to reassign him to Scaramouche, with Lamas staying on as the villain.

Sidney had Parker dye her hair red for the film.

Granger, who performed most of his stunts himself, took fencing lessons with Jean Heremans when preparing for the role. The 8-minute-long duel in the theater between Granger and Ferrer took eight weeks of preparation, including memorizing eighty-seven fencing passes. Filming this scene left Granger with a wrenched knee, a damaged shoulder, and an injured back. Other accidents on set included Jean Simmons – who was visiting her husband Granger – almost receiving a sword in her face, and a chandelier hitting a mattress upon which Granger was supposed to lie and embedding itself in the stage. Fortunately for Granger, he insisted on seeing the chandelier dropped once before shooting the scene.

Eleanor Parker later said that Stewart Granger was the only person in her career that she did not get along with:

It wasn’t a conflict between the two of us. Everyone disliked this man … Stewart Granger was a dreadful person, rude … just awful. Just being in his presence was bad. I thought at one point the crew was going kill him. Jean visited him on the set and would leave his dressing room in tears. He humiliated her. It was terrible. All of the dueling scenes in Scaramouche were wonderful, though. I’ll give Granger credit for that. He didn’t know how to do any of that, but worked hard and learned. Mel Ferrer, his counterpart in the movie, was extremely adept at the swordplay, but was a gentleman. He could have taken advantage and upstaged Granger, the star, but he never did.

Eleanor Parker’s perception of the fencing in Scaramouche appears to be mistaken. According to Mel Ferrer:

I’d been playing a lot of goody-goodys, making pictures for Metro; and they asked me to do this one. They asked me if I fenced, and I told them, “No.” They said, “We thought you were a fencer.” And I said, “No, I’m a dancer.” They said, “So, what do we do about that?” I said, “It’s very simple. I’ll learn to fence the way a dancer would learn a routine. If I were learning a ballet, I’d learn it by number. One, two, three, four … four, you’re on this spot; five, six, seven, you do that; that’s the way you learn choreography.” And I learned how to fence in six weeks.

We did seven duels in the picture, and each one was different; we never repeated a sequence. And that’s like learning seven ballets; it’s very, very difficult …

Jimmy [Stewart Granger] knew how to fence already. He’d been in the theater in England, and that’s part of the training for actors on the London stage; they learn to fence. They learn how to ride, most all of them learn how to ride horseback. They’re so much more developed as performers than we are; they get so much better training.

The movie was particularly popular in France, with admissions of 2,975,521.