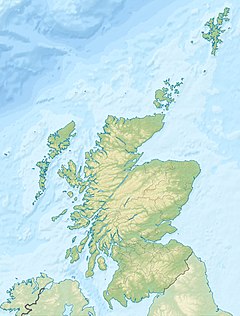 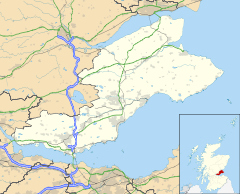 The Old Course at St Andrews is considered the oldest golf course in the world and commonly known as ‘The Cathedral of Golf’. It’s a public course over common land in St Andrews, Fife, Scotland and is held in trust by The St Andrews Links Trust under an act of Parliament. The Royal and Ancient Golf Club of St Andrews club house sits adjacent to the first tee, although it is but one of many clubs (St Andrews Golf Club, New Golf Club, St Regulus Golf Club and St Rules Golf Club are the others) that have playing privileges on the course, along with the general public.

The Old Course at St Andrews is considered by many to be the “home of golf” because the sport was first played on the Links at St Andrews in the early 15th century. Golf was becoming increasingly popular in Scotland until in 1457, when James II of Scotland banned golf because he felt that young men were playing too much golf instead of practicing their archery. The ban was upheld by the following kings of Scotland until 1502, when King James IV became a golfer himself and removed the ban.

In 1552, Archbishop John Hamilton gave the townspeople of St. Andrews the right to play on the links. In 1754, 22 noblemen, professors, and landowners founded the Society of St Andrews Golfers. This society would eventually become the precursor to the Royal and Ancient which is the governing body for golf everywhere outside of the United States and Mexico. St Andrews Links had a scare when they went bankrupt in 1797. The Town Council of St. Andrews decided to allow rabbit farming on the golf course to challenge golf for popularity. Twenty years of legal battling between the golfers and rabbit farmers ended in 1821 when a local landowner and golfer named James Cheape of Strathtyrum bought the land and is credited with saving the links for golf. The course evolved without the help of any one architect for many years, though notable contributions to its design were made by Daw Anderson in the 1850s and Old Tom Morris (1865–1908), who designed the 1st and 18th holes. Originally, it was played over the same set of fairways out and back to the same holes. As interest in the game increased, groups of golfers would often be playing the same hole, but going in different directions.

The Old Course was pivotal to the development of how the game is played today. For instance, in 1764, the course had 22 holes and the members would play the same hole going out and in with the exception of the 11th and 22nd holes. William St Clair of Rosslyn as the captain of The Captain and Gentlemen Golfers authorized changes to St. Andrews on 4 October 1764. He decided that the first four and last four holes on the course were too short and should be combined into four total holes (two in and two out). St Andrews then had 18 holes and that was how the standard of 18 holes was created. Around 1863, Old Tom Morris had the 1st green separated from the 17th green, producing the current 18-hole layout with 7 double greens and 4 single greens. The Old Course is home of The Open Championship, the oldest of golf’s major championships. The Old Course has hosted this major 29 times since 1873, most recently in 2015. The 29 Open Championships that the Old Course has hosted is more than any other course, and The Open is currently played there every five years.

Bobby Jones (who later founded Augusta National) first played St Andrews in the 1921 Open Championship. During the third round, he infamously hit his ball into a bunker on the 11th hole. After he took four swings at the ball and still could not get out, after losing his temper, he continued the round, but did not turn in his score card, thus disqualifying himself. However, he did continue to play in the fourth round. Six years later, when the Open Championship returned to St Andrews, Jones also returned. Not only did he win, he also became the first amateur to win back-to-back Open Championships. He won wire-to-wire, shooting a 285 (7-under-par), which was the lowest score at either a U.S. Open or Open Championship at the time. He ended up winning the tournament by a decisive six strokes.

In 1930, Jones returned to St Andrews for the British Amateur. He won, beating Roger Wethered by a score of 7 and 6 in the final match. He subsequently won the other three majors, making him the only man in the history of the sport to win the Grand Slam. Jones went on to fall in love with the Old Course for the rest of his life. Years later, he said “If I had to select one course upon which to play the match of my life, I should have selected the Old Course.” In 1958 the town of St Andrews gave Jones the key to the city; he was only the second American to receive the honour (after Benjamin Franklin in 1759). After he received the key, he said “I could take out of my life everything but my experiences here in St. Andrews and I would still have had a rich and full life.”

“I’m very sentimental and the place gets to me every time I go there. St Andrews was always where I wanted to finish my major career.”

—Jack Nicklaus on finishing his career at St Andrews, 2005. 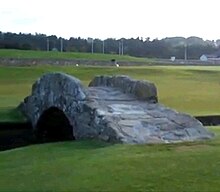 One of the unique features of the Old Course are the large double greens. Seven greens are shared by two holes each, with hole numbers adding up to 18 (2nd paired with 16th, 3rd with 15th, all the way up to 8th and 10th). The Swilcan Bridge, spanning the first and 18th holes, has become a famous icon for golf in the world. Everyone who plays the 18th hole walks over this 700-year-old bridge, and many iconic pictures of the farewells of the most iconic golfers in history have been taken on this bridge. A life-size stone replica of the Bridge is situated at the World Golf Hall of Fame museum in St. Augustine, Florida. Only the 1st, 9th, 17th and 18th holes have their own greens. Another unique feature is that the course can be played in either direction, clockwise or anti-clockwise. Along with that, the Old Course has 112 bunkers which are all individually named and have their own unique story and history behind them. The two most famous are the 10 ft deep “Hell Bunker” on the 14th hole, and the “Road Bunker” on the 17th hole. Countless professional golfers have seen their dreams of winning the Open Championship squandered by hitting their balls into those bunkers.

The Old Course is also home of The Road Hole, the par-4 17th, one of the world’s most famous golf holes and perhaps the hardest hole in tournament golf. Among its unique features are:

The general method of play today is counterclockwise, although clockwise play has been permitted on one day each year in recent years, and for several special one off events since. Originally, the course was reversed every week in order to let the grass recover better. One other unusual thing about the Old Course is that it is closed on Sundays to let the course rest. On some Sundays, the course turns into a park for all the townspeople who come out to stroll, picnic and otherwise enjoy the grounds. As a general rule, Sunday play is allowed on the course on only four occasions:

Sunday play may also occur when the Old Course hosts other major events; for example, when it hosted the Curtis Cup in 2008.

In 2005 the Old Course was ranked as the greatest golf course outside the United States, by Golf Digest. 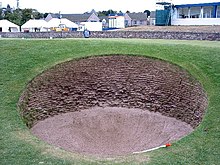 R&A Clubhouse on the Old Course.

The Open Championship has been staged at the Old Course at St Andrews 29 times. The following is a list of the champions:

Winners of the Women’s British Open at the Old Course at St Andrews:

Winners of the Senior Open Championship at the Old Course at St Andrews:

St Andrews Links in the town of St Andrews, Fife, Scotland, is regarded as the “Home of Golf“. It has one of the oldest courses in the world, where the game has been played since the 15th century. Today there are seven public golf courses; the Balgove, Eden, Jubilee, Strathtyrum, New, the Old Course (which is widely considered one of the finest, and certainly the most famous and traditional course in the world), and The Castle Course, sited on the cliffs a mile to the east of St Andrews and designed by the architect David McLay Kidd, which opened in June 2008. The courses of St Andrews Links are owned by the local authorities and operated by St Andrews Links Trust, a charitable organization. St Andrews is also home to the Royal and Ancient Golf Club of St Andrews, one of the most prestigious golf clubs and until 2004 one of the two rulemaking authorities of golf (in that year, the Royal and Ancient Club passed on its rulemaking authority to an offshoot organisation, The R&A).

In general, St Andrews is a popular hub for golf tourism, as there is a high density of links and heathland courses in the area. In addition to the public courses there are two courses at the privately owned Fairmont Hotel (Torrance and Kittocks) to the south of the town; the Dukes and Drumoig, both inland parkland courses to the west. A few miles further South are the modern links of Kingsbarns and the traditional Balcomie links at Crail. Also nearby are the courses at Elie, Lundin, Leven, Scotscraig and Anstruther. Within 45 minutes drive are Monifieth, Downfield, Carnoustie and Panmure.

The Eden Course opened in 1914 after demand on the existing courses grew. It was designed by Harry Colt, and alterations in 1989 by Donald Steel maintain Colt’s standards. It was named after the Eden estuary by which it resides, as the profits from mussels collected there once made up an important part of the St Andrews economy.The

Jubilee Course is the third championship golf course at the Home of Golf. It was named after Queen Victoria‘s Diamond Jubilee celebration in 1897.Originally intended for Victorian dressed ladies, and other golf beginners, it has evolved into one of the hardest courses at St Andrews Links. The course is commonly used to test junior and amateur golfers for the British Mid-Amateur Golf Championship, as well as the St Andrews Links Trophy.

Initially a 12-hole course, it was expanded to 18 holes in 1905. The course has seen considerable developments under the management of Willie Auchterlonie, Donald Steel, David Wilson and Graeme Taylor. It now plays at around 6,745 yards, and is host to the St Andrews Links Trophy. The Jubilee is one of several courses in Scotland that are under threat from erosion.

The Strathtyrum Course, opened in July 1993, became the first new 18 hole layout at St Andrews in nearly 80 years. It was built on land that was previously part of the Strathtyrum estate and sold to the St Andrews Links Trust by Mrs Gladys Cheape in 1986.

The Old Course, believed to be the oldest golf course in the world, dates back more than 600 years.

The New Course, located adjacent to the Old Course, was paid for and commissioned by The R&A who asked Old Tom Morris to be designer. The New Course opened for play in 1895.

The Royal and Ancient Golf Club of St Andrews