DevOps (a clipped compound of “development” and “operations“) is a software engineering culture and practice that aims at unifying software development (Dev) and software operation (Ops). The main characteristic of the DevOps movement is to strongly advocate automation and monitoring at all steps of software construction, from integration, testing, releasing to deployment and infrastructure management. DevOps aims at shorter development cycles, increased deployment frequency, and more dependable releases, in close alignment with business objectives. 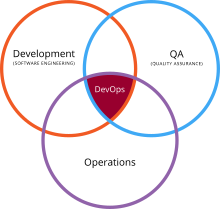 In 2009 Patrick Debois coined the term by naming a conference “devopsdays” which started in Belgium and has now spread to other countries.

The term DevOps has been used in multiple contexts.

A definition proposed by Bass, Weber, and Zhu, is:

DevOps is a set of practices intended to reduce the time between committing a change to a system and the change being placed into normal production, while ensuring high quality.

As DevOps is intended to be a cross-functional mode of working, rather than a single DevOps tool there are sets (or “toolchains“) of multiple tools. Such DevOps tools are expected to fit into one or more of these categories, reflective of key aspects of the development and delivery process:

Some categories are more essential in a DevOps toolchain than others; especially continuous integration (e.g. Jenkins) and infrastructure as code (e.g. Puppet).

Relationship to other approaches

The need for DevOps arose from the increasing success of agile software development, as that led to organizations wanting to release their software faster and more frequently. As they sought to overcome the strain this put on their release management processes, they had to adopt patterns such as application release automation, continuous integration tools, and continuous delivery.

Continuous delivery and DevOps have common goals and are often used in conjunction, but there are subtle differences.

While continuous delivery is focused on automating the processes in software delivery, DevOps also focuses on the organization change to support great collaboration between the many functions involved.

DevOps and continuous delivery share a common background in agile methods and lean thinking: small and frequent changes with focused value to the end customer. They are well communicated and collaborated internally, thus helping achieve faster time to market, with reduced risks.

The application of continuous delivery and DevOps to data analytics has been termed DataOps. DataOps seeks to integrate data engineering, data integration, data quality, data security, and data privacy with operations. It applies principles from DevOps, Agile Development and the statistical process control, used in lean manufacturing, to improve the cycle time of extracting value from data analytics.

In 2003, Google developed site reliability engineering, a new approach for releasing new features continuously into large-scale high-availability systems while maintaining high-quality end user experience. While SRE predates the development of DevOps, they are generally viewed as being related to each other. Some aspects of DevOps have taken a similar approach.

DevOps is often viewed as an approach to applying systems administration work to cloud technology.

The goals of DevOps span the entire delivery pipeline. They include:

Views on the benefits claimed for DevOps

However, a study released in January 2017 by F5 of almost 2,200 IT executives and industry professionals found that only one in five surveyed think DevOps had a strategic impact on their organization despite rise in usage. The same study found that only 17% identified DevOps as key, well below software as a service (42%), big data (41%) and public cloud infrastructure as a service (39%).

DevOps initiatives can create cultural change in companies by transforming the way operations, developers, and testers collaborate during the development and delivery processes. Getting these groups to work cohesively is a critical challenge in enterprise DevOps adoption.

DevOps as a job title

While DevOps reflects complex topics, the DevOps community uses analogies to communicate important concepts, much like “The Cathedral and the Bazaar” from the open source community.

Companies with very frequent releases may require a DevOps awareness or orientation program. For example, the company that operates the image hosting website Flickr developed a DevOps approach, to support a business requirement of ten deployments per day; this daily deployment cycle would be much higher at organizations producing multi-focus or multi-function applications. This is referred to as continuous deployment or continuous delivery and has been associated with the lean startup methodology. Working groups, professional associations and blogs have formed on the topic since 2009.

To practice DevOps effectively, software applications have to meet a set of architecturally significant requirements (ASRs), such as: deployability, modifiability, testability, and monitorability. These ASRs require a high priority and cannot be traded off lightly.

Although in principle it is possible to practice DevOps with any architectural style, the microservices architectural style is becoming the standard for building continuously deployed systems. Because the size of each service is small, it allows the architecture of an individual service to emerge through continuous refactoring, hence reducing the need for a big upfront design and allows for releasing the software early and continuously.

Some articles in the DevOps literature assume, or recommend, significant participation in DevOps initiatives from outside an organization’s IT department, e.g.: “DevOps is just the agile principle, taken to the full enterprise.”

Adoption of DevOps is being driven by many factors — including:

DevOps automation can be achieved by repackaging platforms, systems, and applications into reusable building blocks through the use of technologies such as virtual machines and containerization.