Continuous delivery (CD or CDE) is a software engineering approach in which teams produce software in short cycles, ensuring that the software can be reliably released at any time and, when releasing the software, doing so manually. It aims at building, testing, and releasing software with greater speed and frequency. The approach helps reduce the cost, time, and risk of delivering changes by allowing for more incremental updates to applications in production. A straightforward and repeatable deployment process is important for continuous delivery.

CD contrasts with continuous deployment, a similar approach in which software is also produced in short cycles but through automated deployments rather than manual ones.

Continuous delivery and DevOps are similar in their meanings and are often conflated, but they are two different concepts. DevOps has a broader scope, and centers around the cultural change, specifically the collaboration of the various teams involved in software delivery (developers, operations, quality assurance, management, etc.), as well as automating the processes in software delivery. Continuous delivery, on the other hand, is an approach to automate the delivery aspect, and focuses on bringing together different processes and executing them more quickly and more frequently. Thus, DevOps can be a product of continuous delivery, and CD flows directly into DevOps. 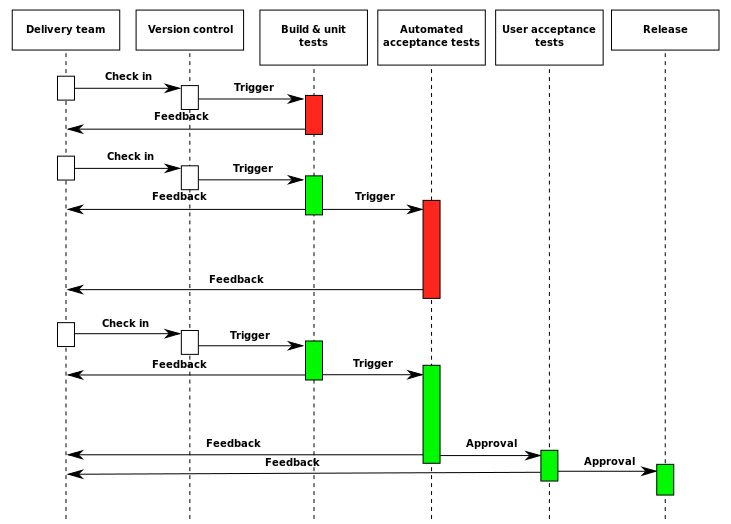 Continuous delivery treats the commonplace notion of a deployment pipeline as a lean Poka-Yoke: a set of validations through which a piece of software must pass on its way to release. Code is compiled if necessary and then packaged by a build server every time a change is committed to a source control repository, then tested by a number of different techniques (possibly including manual testing) before it can be marked as releasable.

Developers used to a long cycle time may need to change their mindset when working in a CD environment. It is important to understand that any code commit may be released to customers at any point. Patterns such as feature toggles can be very useful for committing code early which is not yet ready for use by end users. Using NoSQL can eliminate the step of data migrations and schema changes, often manual steps or exceptions to a continuous delivery workflow. Other useful techniques for developing code in isolation such as code branching are not obsolete in a CD world, but must be adapted to fit the principles of CD – for example, running multiple long-lived code branches can prove impractical, as a releasable artifact must be built early in the CD process from a single code branch if it is to pass through all phases of the pipeline.

Continuous delivery takes automation from source control all the way through production. There are various tools that help accomplish all or part of this process. These tools are part of the deployment pipeline which includes continuous delivery. The types of tools that execute various parts of the process include: continuous integration, application release automation, build automation, application lifecycle management.

To practice continuous delivery effectively, software applications have to meet a set of architecturally significant requirements (ASRs) such as deployability, modifiability, and testability. These ASRs require a high priority and cannot be traded off lightly anymore.

The CD book written by Jez Humble and David Farley popularized the term, however since its creation the definition has continued to advance and now has a more developed meaning. Companies today are implementing these continuous delivery principles and best practices. Difference in domains, e.g. medical vs. web, are still significant and affect the implementation and usage. Well-known companies that have this approach include Yahoo!, Amazon, Facebook, Google, Paddy Power and Wells Fargo.

Several benefits of continuous delivery have been reported.

Obstacles have also been investigated.

Eight further adoption challenges were raised and elaborated by Chen. These challenges are in the areas of organizational structure, processes, tools, infrastructure, legacy systems, architecting for CD, continuous testing of non-functional requirements, and test execution optimization.