The Rational Unified Process (RUP) is an iterative software development process framework created by the Rational Software Corporation, a division of IBM since 2003. RUP is not a single concrete prescriptive process, but rather an adaptable process framework, intended to be tailored by the development organizations and software project teams that will select the elements of the process that are appropriate for their needs. RUP is a specific implementation of the Unified Process.

Rational Software originally developed the rational unified process as a software process product. The product includes a hyperlinked knowledge-base with sample artifacts and detailed descriptions for many different types of activities. RUP is included in the IBM Rational Method Composer (RMC) product which allows customization of the process.

Philippe Kruchten, an experienced Rational technical representative was tasked with heading up the original RUP team. This journey began with the creation of the Rational Objectory Process (ROP) in 1996, when Rational acquired the Objectory Process that had been written by Ivar Jacobson and company. This was renamed Rational Unified Process (RUP) in subsequent releases, in part to align the name with that of the Unified Modeling Language.

To help make this growing knowledge base more accessible, Philippe Kruchten was tasked with the assembly of an explicit process framework for modern software engineering. This effort employed the HTML-based process delivery mechanism developed by Objectory. The resulting “Rational Unified Process” (RUP) completed a strategic tripod for Rational:

This guidance was augmented in subsequent versions with knowledge based on the experience of companies that Rational had acquired.

In 1997, a requirements and test discipline were added to the approach, much of the additional material sourced from the Requirements College method developed by Dean Leffingwell et al. at Requisite, Inc., and the SQA Process method developed at SQA Inc., both companies having been acquired by Rational Software.

These additions lead to an overarching set of principles that were defined by Rational and articulated within RUP as the six best practices for modern software engineering:

Additional techniques including performance testing, UI Design, data engineering were included, and an update to reflect changes in UML 1.1.

In 1999, a project management discipline was introduced, as well as techniques to support real-time software development and updates to reflect UML 1.3. Besides, the first book to describe the process, The Unified Software Development Process (ISBN 0-201-57169-2), was published in the same year.

Between 2000 and 2003, a number of changes introduced guidance from ongoing Rational field experience with iterative development, in addition to tool support for enacting RUP instances and for customization of the RUP framework. These changes included:

In 2006, IBM created a subset of RUP tailored for the delivery of Agile projects – released as an OpenSource method called OpenUP through the Eclipse web-site.

Within each iteration, the tasks are categorized into nine disciplines: 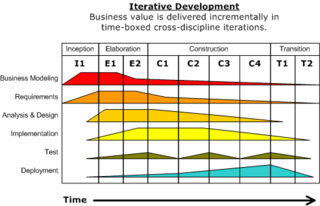 The RUP has determined a project life-cycle consisting of four phases. These phases allow the process to be presented at a high level in a similar way to how a ‘waterfall’-styled project might be presented, although in essence the key to the process lies in the iterations of development that lie within all of the phases. Also, each phase has one key objective and milestone at the end that denotes the objective being accomplished. The visualization of RUP phases and disciplines over time is referred to as the RUP hump chart.

The primary objective is to scope the system adequately as a basis for validating initial costing and budgets. In this phase the business case which includes business context, success factors (expected revenue, market recognition, etc.), and financial forecast is established. To complement the business case, a basic use case model, project plan, initial risk assessment and project description (the core project requirements, constraints and key features) are generated. After these are completed, the project is checked against the following criteria:

If the project does not pass this milestone, called the life cycle objective milestone, it either can be cancelled or repeated after being redesigned to better meet the criteria.

The primary objective is to mitigate the key risk items identified by analysis up to the end of this phase. The elaboration phase is where the project starts to take shape. In this phase the problem domain analysis is made and the architecture of the project gets its basic form.

The outcome of the elaboration phase is:

This phase must pass the lifecycle architecture milestone criteria answering the following questions:

If the project cannot pass this milestone, there is still time for it to be canceled or redesigned. However, after leaving this phase, the project transitions into a high-risk operation where changes are much more difficult and detrimental when made.

The key domain analysis for the elaboration is the system architecture.

The primary objective is to build the software system. In this phase, the main focus is on the development of components and other features of the system. This is the phase when the bulk of the coding takes place. In larger projects, several construction iterations may be developed in an effort to divide the use cases into manageable segments produce demonstrable prototypes.

The primary objective is to ‘transit’ the system from development into production, making it available to and understood by the end user. The activities of this phase include training the end users and maintainers and beta testing the system to validate it against the end users’ expectations. The system also goes through an evaluation phase, any developer which is not producing the required work is replaced or removed. The product is also checked against the quality level set in the Inception phase.

If all objectives are met, the product release milestone is reached and the development cycle is finished.

To pass the new RUP certification examination, a person must take IBM’s Test 839: Rational Unified Process v7.0. You are given 75 minutes to take the 52 question exam. The passing score is 62%.

Six best practices as described in the rational unified process is a paradigm in software engineering that lists six ideas to follow when designing any software project to minimize faults and increase productivity. These practices are:

Develop iteratively
It is best to know all requirements in advance; however, often this is not the case. Several software development processes exist that deal with providing solution on how to minimize cost in terms of development phases.
Manage requirements
Always keep in mind the requirements set by users.
Use components
Breaking down an advanced project is not only suggested but in fact unavoidable. This promotes ability to test individual components before they are integrated into a larger system. Also, code reuse is a big plus and can be accomplished more easily through the use of object-oriented programming.
Model visually
Use diagrams to represent all major components, users, and their interaction. “UML”, short for Unified Modeling Language, is one tool that can be used to make this task more feasible.
Verify quality
Always make testing a major part of the project at any point of time. Testing becomes heavier as the project progresses but should be a constant factor in any software product creation.
Control changes
Many projects are created by many teams, sometimes in various locations, different platforms may be used, etc. As a result, it is essential to make sure that changes made to a system are synchronized and verified constantly. (See Continuous integration).

A link to the download ZIP file package is sent the very same day by email when the PayPal payment is processed. Local currency conversion enabled in PayPal with all major credit cards. Templates are fully editable and once purchased, upgrades to the latest package are FREE. Excel templates are also included for earlier versions.